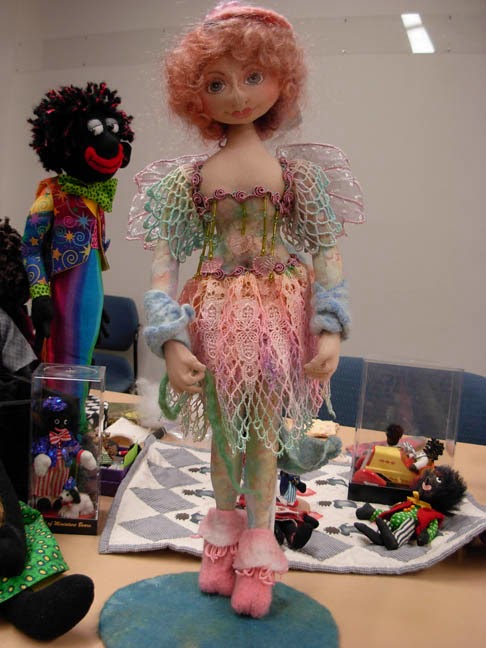 Speaking of fairies, we were thrilled to see this one brought by Phoebe member Elise Bozo from Spokane to the﻿ March Phoebe meeting. She proudly exhibited this
beautiful fairy doll she had just completed. The costume is hand-dyed.


SHOW AND TELL
The theme for the March meeting was "It's a Small World." Zanaib requested that we bring samples of miniatures to share. These could be items we had made, or ones we had collected. Many people brought  Gollywogs, which are historically small black dolls that are now highly collectible and said to be valuable. And, we were appreciative of those who brought new dolls and mixed media art they had just completed. 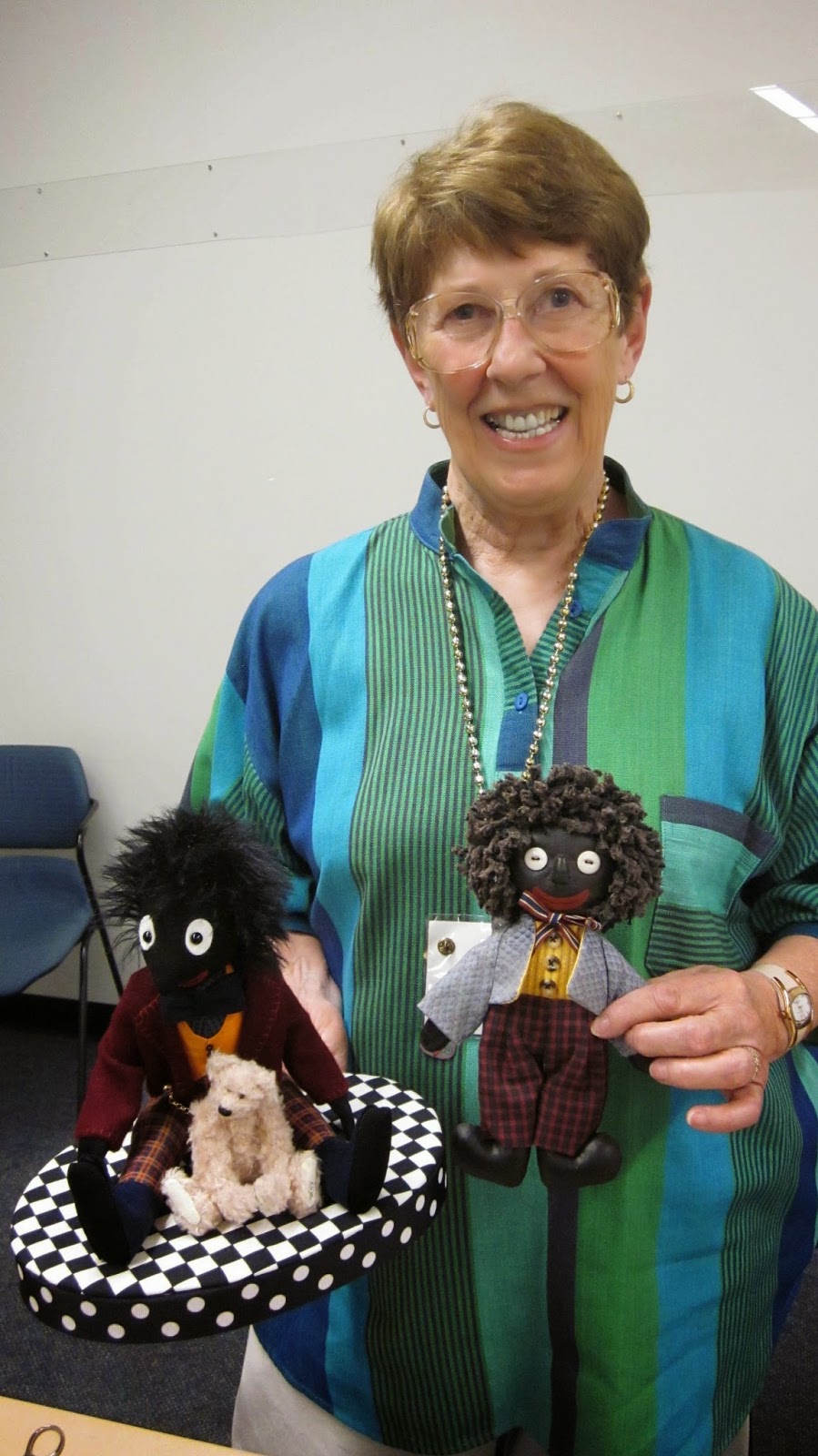 Elise is shown here with two of her Gollywogs. If you check the background of her fairy at the top of this post, you will see more examples from her large collection that she
brought with her on her California visit. 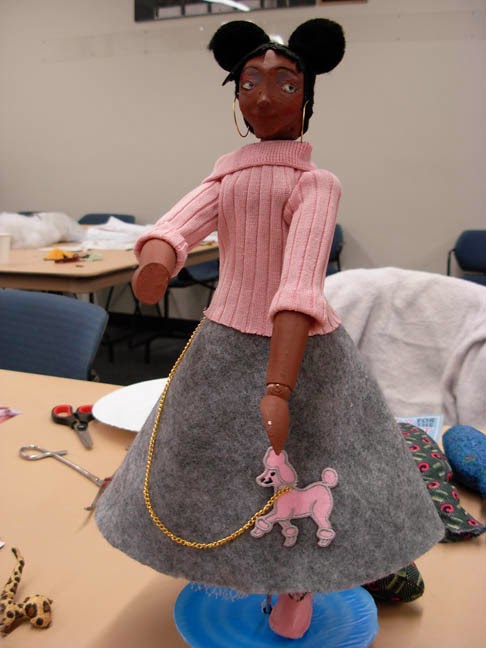 Diane Willis created this too cute "retro" costumed doll she made from a wooden figure like ones many of us have used to sketch human poses. And, how many of us remember when we wore skirts just like this to high school? Those were the days! 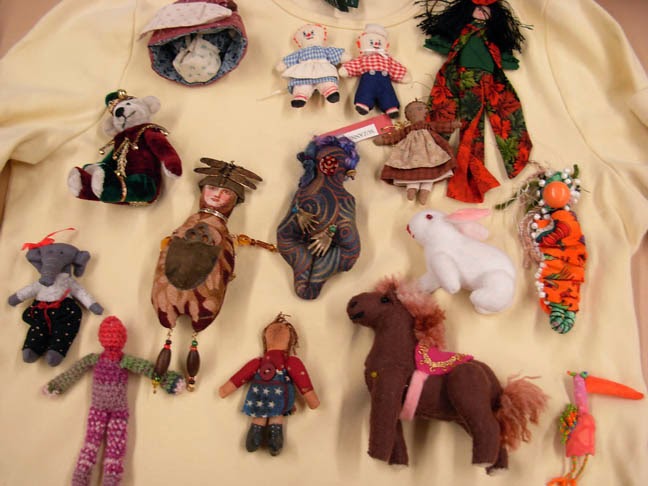 Several people brought collections of the figurative pins and ornaments they have made or received over the years. It takes skill and patience to create items this small! 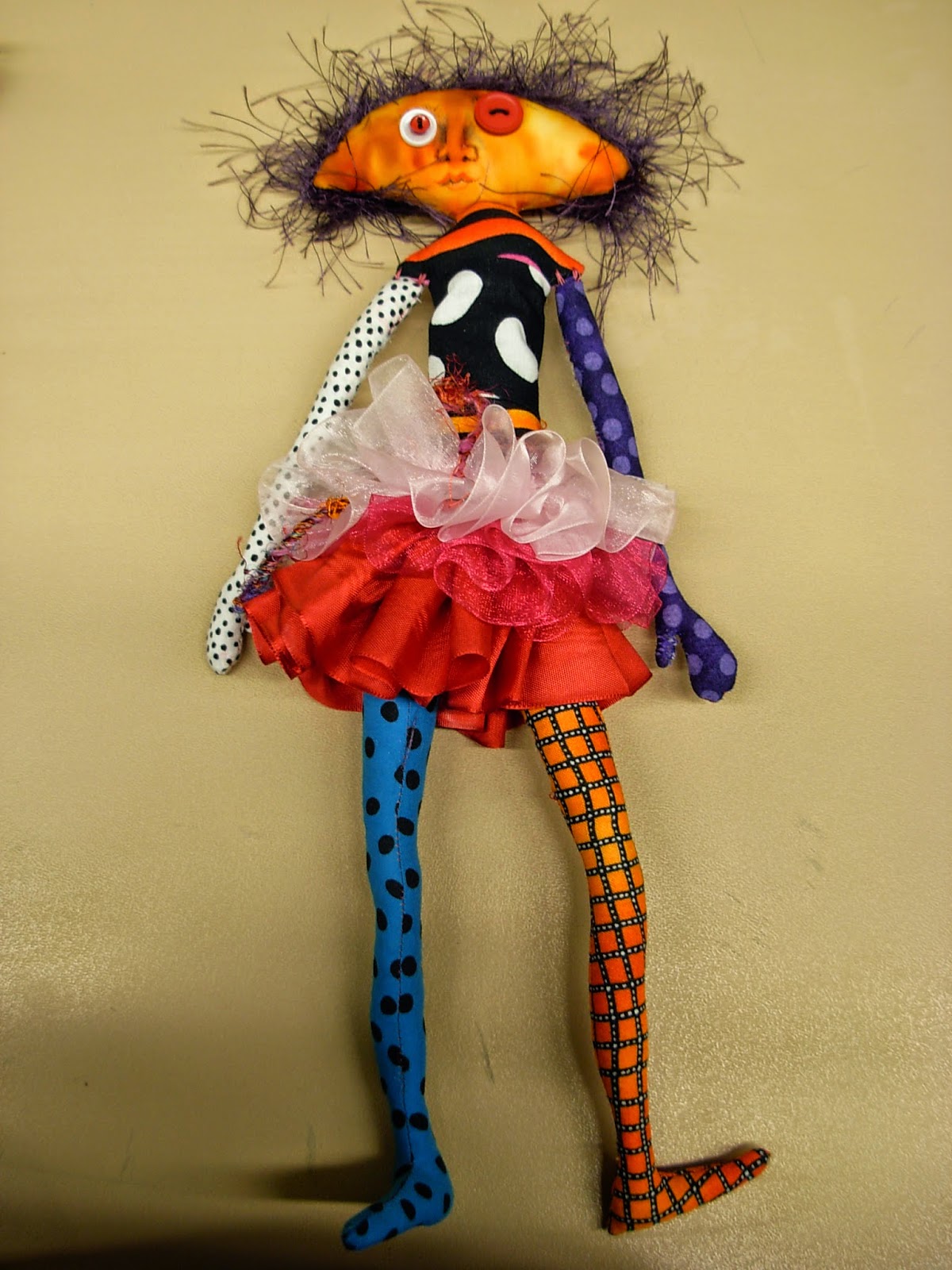 Colleen is already ahead of most of us... she has made several dolls from the Nola pattern. They will be destined for the Castro Valley Library doll exhibit we will display in November. This doll is a true tribute to the essence of the art of Nola Hart, creator of this pattern, which was published in Cloth, Paper, Scissors several years ago. 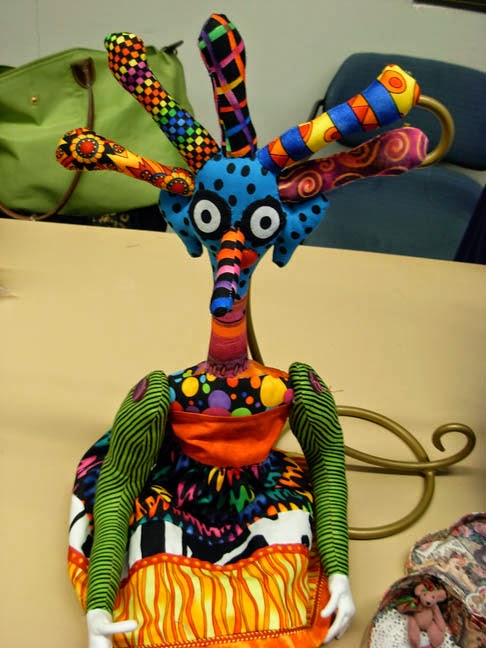 Another fabulous and very colorful doll created by Colleen.
Obviously, Colleen has an amazing stash of fabrics! 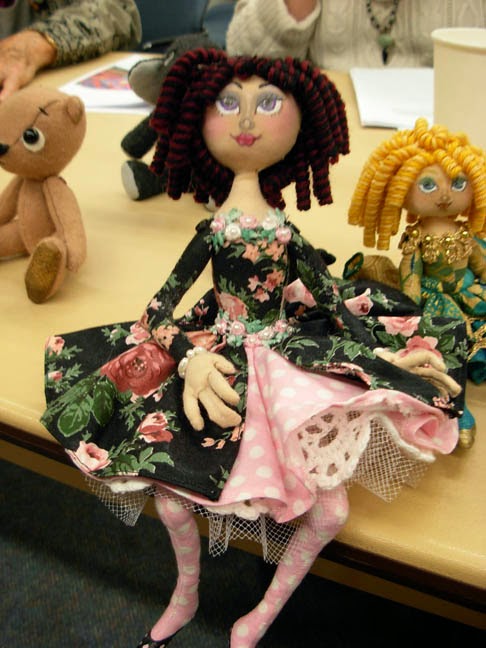 Here is one of the latest dolls created by Stephanie.
I think she used the Nola pattern for this one.
Those legs look familiar. 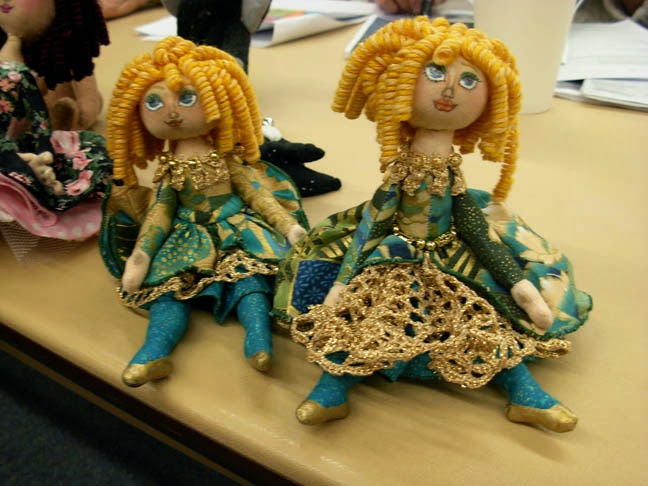 And, here are two more of Stephanie's darling dolls. She used doilies for their underskirts. A really cute idea! 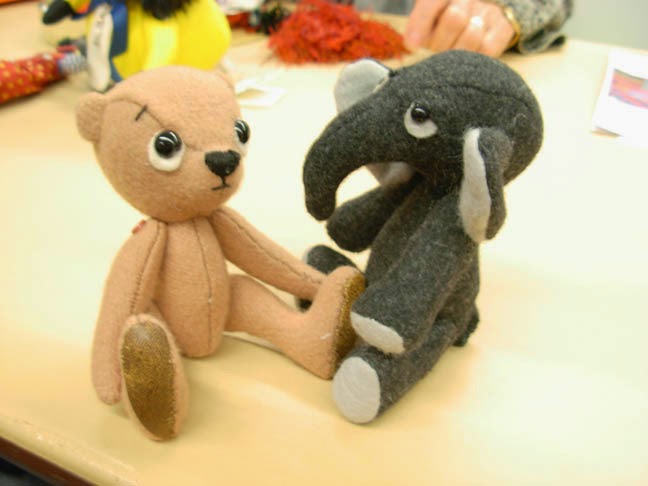 Stephanie is a master at creating animal figures. These made from felt are adorable. If you ever visit her Pinterest site you will see many boards filled with links to free patterns.
You might want to try some of them yourself. 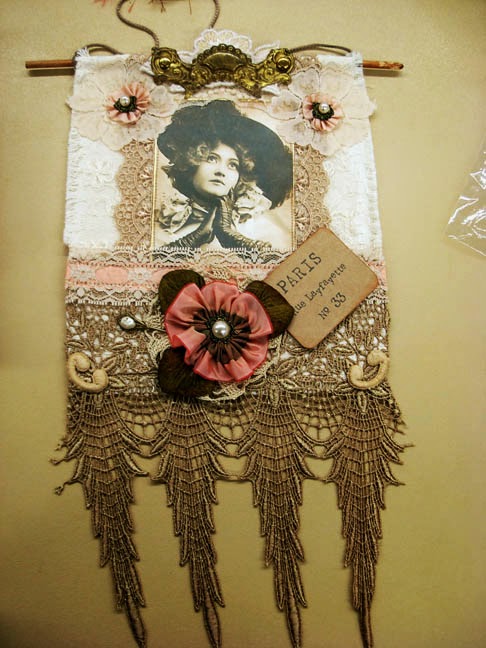 Donna brought this wall-hanging made
from vintage fabric scrap. 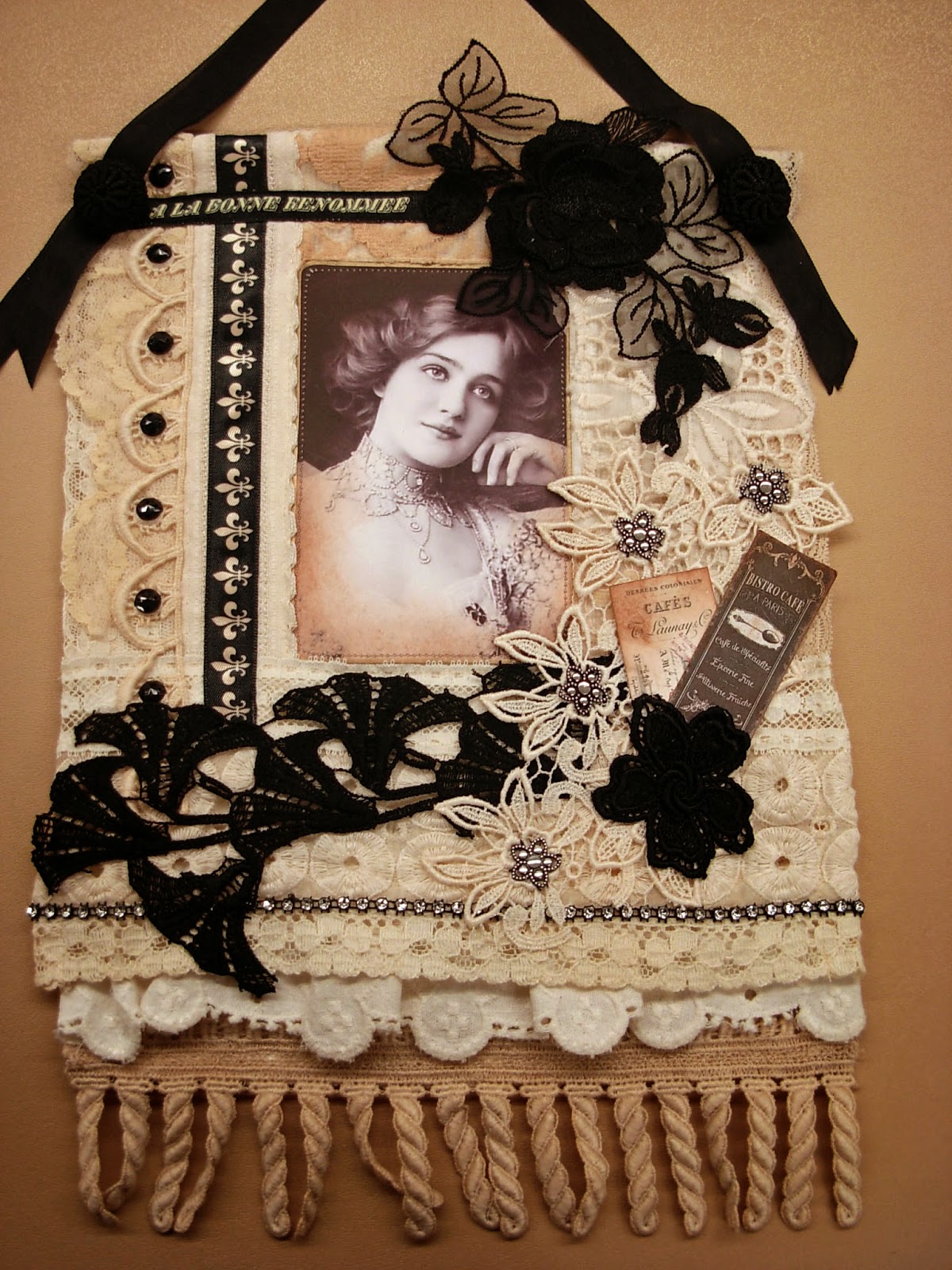 This is the second fabric collage she made to hang on a wall.
Posted by Flying Phoebe Cloth Doll Club at 10:09 AM No comments: