Calendar of Events for 2014
April 1 through 30, Zanaib's Altered Book Display celebrating the 54th anniversary of the B Street Book Shop in Hayward. Many Phoebes are participating and while the original goal was 54 books, many more are expected to be on display. Be sure to go by and see it.

April 17, Phoebe Monthly Meeting, 6:30 P.M., Alameda County Office of Education, 313 W. Winton, Hayward. The Exchange is a "Mexico" themed postcard. Theme of the meeting will be "It's a Small World," so bring any of your small dolls, whether pins, miniatures, collections... made by you or not... we want to see them! Patterns for small dolls will be available at the meeting, along with a discussion on tips for making them. Don't miss it! Also, read over your copy of the new by-laws, as we will be voting to approve them at the meeting.

April 26 and 27, Betts Vidal "Frog Prince" Workshop, Saturday and Sunday, to be held at Always Quilting, 4230 Olympic, San Mateo (on the border of Belmont). Contact Stephanie at smitharts2002@yahoo.com to sign up. Contact Betts at bettsbetz@aol.com for information.

June 28 (Saturday), Phoebe Alameda County Fair Outreach Day. Set-up at noon. Open to the public at 1 P.M. Sign-up sheet to work noon to 3 P.M. or 3 to 6 P.M. will be at the April meeting. Each Phoebe is requested to make at least 25 stump dolls for this event, or donate push-mold polymer faces. Start going through your cotton stash for colorful doll fabric, and also for glitzy embellishments you would like to donate for the event. Bring your dolls—and stuffing and sewing tools—to stuff and sew at our monthly meetings.

September 2014, Phoebe Doll Exhibit at the Castro Valley Library. Date to be determined. Each Phoebe is asked to make their original interpretation of the Nola Hart cloth doll pattern (you may enlarge or scale it down a maximum of 10%). You may also submit other dolls you have made. Dolls will be due in August.

The theme for the March postcard was France. Here are two examples of the very beautiful and clever cards that Phoebes made for the exchange. 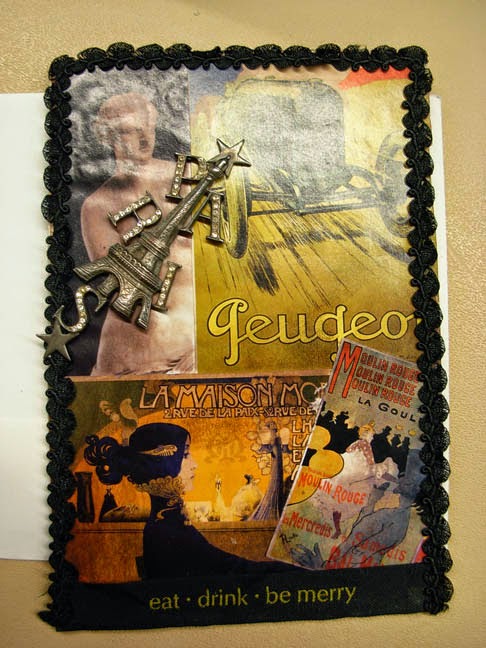 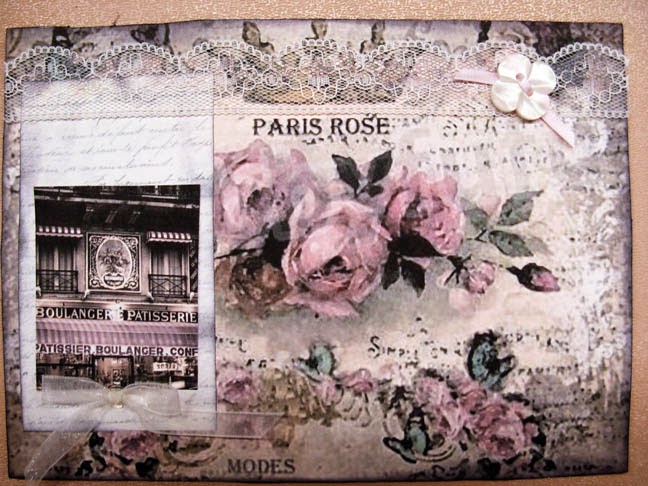 The first challenge in 2014 was due at the March meeting. In January Mary Porter Vaughan had handed a bag with a CD in a tin and some origami papers to all who wished to participate. The challenge was to use one or more of the challenge bag items to create some original art. Here are a few of the many one-of-a-kind creations the very imaginative Phoebes came up with...

A special event at the March Phoebe meeting was the Parade of Dolls, which consisted of everyone bringing a doll they had made or collected, and wearing something that matched their doll.


ABOUT ME BY STEPHANIE SMITH 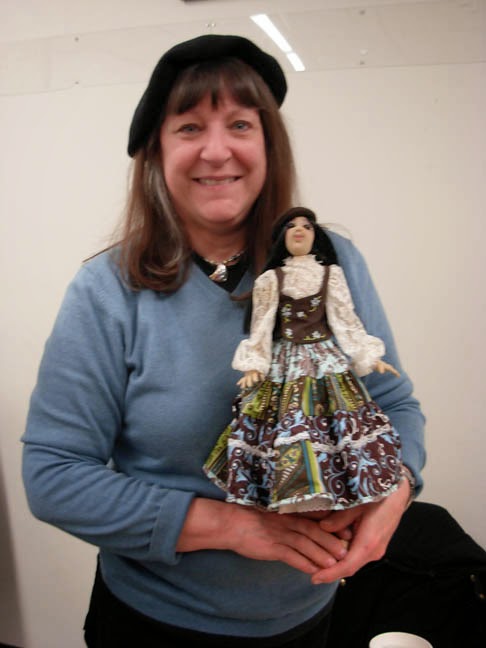 A special segment of the March meeting was devoted to our on-going "All About Me" presentations, where Phoebes talk about their artistic journeys and the road that led them to the world of doll-making. Stephanie Smith led us on an inspiring walk through her life. She was already sewing and making dolls by the time she was seven. Her past was hugely influenced by her Godfather, who was an artist and window dresser for the Emporium store in San Francisco.

Posted by Flying Phoebe Cloth Doll Club at 11:37 AM No comments: